We are excited (and super grateful) to welcome Dani’s aunt to our space this morning. We are so inspired by what she is doing we planted up a few hay bales ourselves this last week! Enjoy her great story and get entered to win a fabulous book on her blog!

If this is being posted then likely my niece Dani has made me (or will soon be making me) a great-aunt again, so congratulations to both Dani and Kevin.  I can’t wait to meet my new great-nephew! I am happy to be doing a guest post today for The Adventure Bite.

Thank you Dani and Kevin for having me.    While we’re talking family here I’ll introduce myself.  My name is Suelynn Jacobus.  My husband and I live in Oregon where we run our trucking business.

We have 4 teenagers, who are all amazing individuals.  It has been bittersweet to watch them grow up over the years, but grow up they have and I’m thankful I was able to be there for much of their growing up years.

For this guest post I chose to introduce what will be a series on our garden experiment here in the High Desert of Central Oregon where we have a short growing season, cool nights and frosts in July which all together make gardening a challenge to be sure. Below is a picture of our garden.  As you can see it’s a large garden with plenty of room to learn and to grow.

Backing up a little, I grew up in a pretty farm rich area where you really could grow almost anything. Moving away and starting a family on my own, I had no idea I would soon be trying to figure out how to work around Mother Nature to accomplish something so basic. One of the first things I heard upon moving to Central Oregon was, “You can’t garden here!”

Standing in the local historical museum recently, I had the opportunity to note a slice of an old apple tree and the sign with it explaining how prolific the orchard it came from used to be.  That orchard was once right in the middle of our downtown and this evidence only confirmed what I had already found to be untrue. You can garden here!

What people really should say  is, “There are certain crops that don’t thrive here.” These crops can be rather hit and miss depending on frosts and each years growing season.”   Of course these hit and miss crops would have to be some of my favorites.  In the beginning, pretty frustrated, I fought the good fight and tried to grow these crops anyway with fairly sad results.

Now having lived in the same little space for over a decade I’ve learned you have to be creative and to think differently. There are so many ideas out there though.  It leaves one to wonder which are correct and which are gimmick?

Is it a combination of several or is it more a case by case basis of what works and what doesn’t?  Zoning and micro climates certainly make a solid vote for everyone having individual growing needs.  Then truly the best answer is to experiment and see for yourself what works.  In planning your garden this year what if you chose one crop and then tried multiple methods with that same crop?  You’d have what’s called a controlled experiment and you’d soon know for yourself what works best.   While I am growing quite a large garden with a bit of everything I do have some crops that are being grown multiple ways.  At the end of the season I am hoping to have some solid solutions about some of the more sensitive or warmer crops that struggle to grow in our region.

It has actually been about 3 years since I had more for a garden then pots on the back deck.   Energetic households and time to garden didn’t coincide.  This year was different and as a plan came together I wondered how on earth I would accomplish it all, when wonderfully things just began to  fall into place.  I’m feeling pretty blessed about that.

Don’t get me wrong, there has been a lot of work involved. The initial set up for our garden has been huge. It will be a great foundation to build upon though and much less work will be needed not only next year, but this summer as well.

We started out with the decision that we would be moving our garden from what has been known as the field at our house to the old unused horse pen.  This was ideal since it still had a 6 ft tall fence from my days of having a stud colt.  For all the times deer have come on the property they have never gone into that pen.  One of the horse sheds has been the coop for our chickens though they were open range till recently.

Now we have built a fence around that shed to contain them and keep them out of what would soon be our garden.  The pig pen, at the time empty, was moved to the back of the horse pen for a bit more feng shui as to the navigation ability of the the garden.  It was right in the middle of everything and had been pretty in the way. 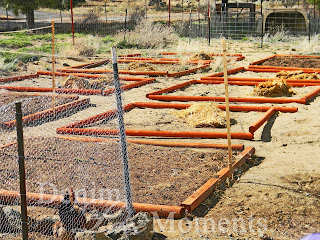 Finally it was time to start setting up the garden beds.  I laid out 8′ long boards forming square beds and walking pathways as I went.  Then I began putting layers in the newly created beds to help our permaculture along.  Things like straw and leaves followed by chicken compost obtained from a good spring cleaning out of the coop.

Last I sewed my seeds and put a thin layer of mulch on top to protect them from the weather that was still making up it’s mind.  I let the seeds lay dormant, including and especially the potatoes because it was still much to cold for them to come up.

Looking about,  I still had half a horse pen to fill only the other half was very weedy and would take a lot of time to prepare.  In the plan I chose to do no till garden methods.  One of which was “Back to Eden” and the second was “Straw Bale Gardening”.

This last would work well to help bring this problem section of the garden back under control.  Instead of days weeding and prepping the ground we instead had it set up in one day with lots and lots of free straw bales lined up in tidy little rows. I did dig up the noxious weeds before setting the bales on the ground.  The chickens had a nice little salad of them that night.

I went through the process of conditioning the bales and set up a watering system.  When the bales conditioning process was complete it was still too cold for many of the warmer crops I would be planting in them so I only sewed seeds for some of the cole crops I had choses to grow in them and transplanted my strawberries into the bales as well.  At this point there are still quite a few open bales awaiting transplants, however I’m keeping them safe from the weather inside till further notice.  Soon the weather will become a bit more consistent and it will be safer to move them out, though I will still likely have to cover them at night.

The final step for now was to put in the tree mulch to keep the weeds down in the isles.  You can see the mulched isles in the introductory garden picture above.  As the plants grow in the Back to Eden portion of the garden I will tuck them in with more tree mulch.  The root systems in the plants will develop and be better able to reach their water source inside the bales and the mulch in the Back to Eden method will hold in more moisture around the plants.  Much less watering will then be required which is great both for my utility bill and the environment.

Some proof it will work

I am not doing this experiment completely blind.  My Sister-in-law who lives on the north end of town, has already had success with the Back to Eden method.  As I walked around her house last Thanksgiving and noted all the pumpkins I was surprised when she said she’d grown them.  They are one of the crops I’ve been told time and time again “You can’t grow that here” and then not had the best of luck myself when trying to grow them anyway.  I’ve seen with my own eyes you can though and now I’m going to try it again on the south end of town with more creative methods to help them along.  We’ll see how I do.

I am going to call all of this “The Great Garden Experiment.” There will be a tag or category under The Great Garden Experiment at my website, with updates as the season goes on. Though it’s still too early for some of the warmer crops, the cole crops both in the bales and in the Back to Eden beds seem to be coming along nicely. Generally we don’t plant around here till almost the end of May, so just the fact I planted almost a month ago alone has me giddy.

I’ll be going through this more in detail in the future, but for now I encourage you to do your own research.  Check out the links in this post.  Also  County extension offices can be great resources. I highly suggest clicking the link provided and contacting your local extension office or perhaps Master Gardeners Assoc. Any discussion you have with either of those will be a great foundation to your gardening plans.

As for the Straw Bale Gardening, I strongly recommend reading his book so you don’t start off wrong and end up with mixed results as many I noted on the web have done due to maybe only having partial information from various websites.  There really is a lot of information in the book.