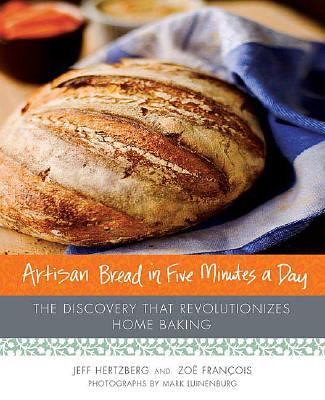 A few weeks ago I got the nerve up to write the publishers of Artisan Bread in Five Minutes a Day: The Discovery That Revolutionizes Home Baking and see if they would be interested in having us do a review and giveaway of any of their books. It was a few weeks but a reply did come and they agreed to send us not one, but all three of the cookbooks in the series!

I have cooked the basic bread recipe for several years simply from their youtube video and have always received rave reviews from everyone who tasted it. Trying out their famed brioche dough was on my “must do” list that always turned into the “never do” list because I am a slacker. Well, in my defense I had made brioche once in culinary school and it was an extremely complicated task and it had so much butter in it that I thought it best not to do that to my waistline everyday.

But when I was finally going to be able to get my hands on these books I knew immediately what I would be cooking from them. Brioche. It would need to be a special occasion of course though because 5 pounds of brioche in my refrigerator was decadence that I personally am not capable of resisting. 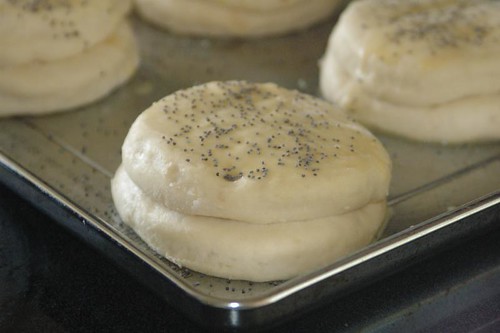 Since I didn’t have any english muffin rings or a hamburger bun pan I tried forming them in two different ways. First I just free formed them as they suggested. This gave a nice roll but it wasn’t super even (let’s be honest, none of them were). I stumbled upon a blog (whom I cannot find right now so please send me a message if its yours!) where the gal actually formed the bun in two parts.

Basically you roll out the dough and cut it like biscuits and then top the bottom bun with an identical piece of dough on top. No eggwash or anything in between.

This proved to work great! The buns had a perfect definition between the top and bottom buns and were easily pulled apart by our guests (read: less prep work for you!). 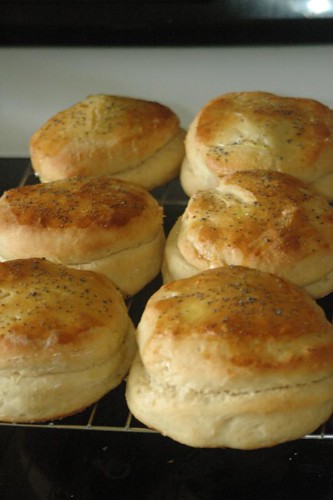 I topped them with an eggwash and poppy seeds before baking and they were just beautiful. The dough was sweet from the honey and so tender. It was perfectly buttery but not flaky, and definitely not greasy like some brioche I have had. It had a great amount of air in it but also was thick enough that it had good density to hold up to the toppings. 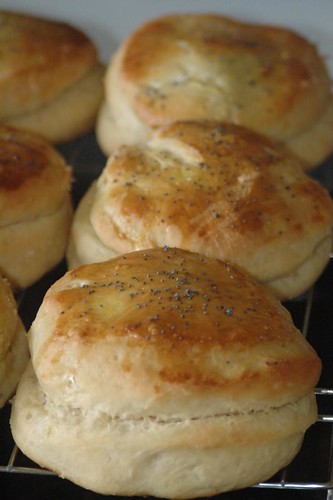 They also had great squishability–yes that is a word! With a burger this big that’s an important factor: 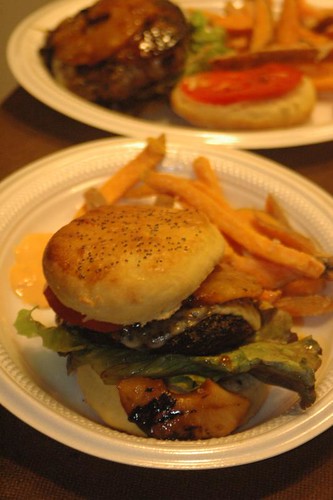 We served fried sweet potato fries and spicy sriracha dipping sauce with the teriyaki pineapple burger. It garnered comments like, “the best burger of my life” and “you made these buns!??! Guys! She made these buns!! These are homemade buns!”

Yes its true. With this book you too can make some tasty buns.

We also have made the tortillas and naan from the book which were both so tasty they were immediately devoured before photos could be snapped.

The books are each absolutely packed with recipes. I won’t be requesting any bread books anytime soon….it’s highly likely it will take you several years to get through this series.

Hat’s off to Zoe and Jeff….I feel like we are friends already just from reading your books and your blog. Which is excellent by the way: www.ArtisanBreadinFive.com

Thanks for the chance to test out your masterpieces, its been an honor and pleasure!

Without further ado here is your chance to win a copy of their original book!