A few weeks ago after we grew weary of pulling Noah out of the kitchen cabinets repeatedly, Kevin saved my sanity by attaching the cabinet doors. It took a bit of coaxing on my part to get him to tackle it and once he got into it I started realizing why he had been stalling. 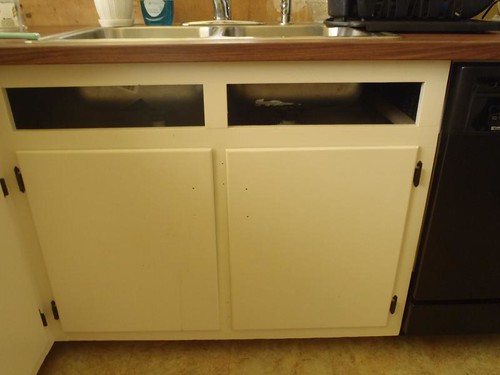 Turns out hanging cabinet doors is trickier than it looks. Rehanging them is easier if you have the exact same hardware and have marked each door (which I carefully did and then forgot to remark them after the paint dried–before we picked them up from their pretty little orderly setup- grrr). We had purchased new hinges for these cabinets though because the old ones were so old and were starting to fall apart. Which means that the holes were in slightly different spots than the original ones.

It was a flustering evening….something else had come up in the day that was on Kevin’s mind and we just weren’t getting into our groove at all. As such I spent most of the evening cleaning and left him to workout his own frustrations. I hope it is encouraging to all that read our little journal here that we are totally human and actually do mess up things and cook dishes that totally flop, and fight and have rooms that are ripped apart. Because we do. 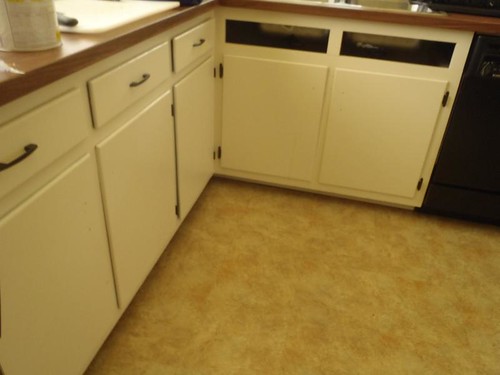 Hanging the cabinet doors turned out to be a bit harder than I had anticipated. Our cabinet doors have a router edge all around the inside of each door so that when they are closed, the bulk of the door fits into the cabinet opening and the face of the door has a minimized profile. See what I mean? 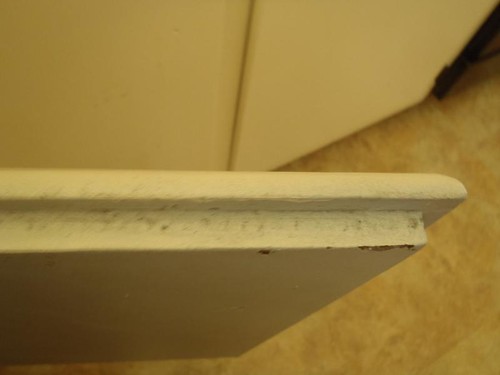 I have not worked with cabinets much, so I can not say how common inset doors are, but I found it made for most of the trouble I encountered. That and the fact that each hing is spring loaded, and when they do not have the weight of a door, and the benefit of screws holding them flush against the cabinet frame, they tend to turn inward just bit. Combined with the inset door, this caused all kinds of trouble. I had to line the door up perfectly level, making sure that the inset part of the door fit perfectly into the opening of the cabinet, and then press hard to flatten the spring loaded hinge against the cabinet frame.

Once you have the door in place its a simple process of holding the door perfectly still while drilling pilot hols for the hing screws and then changing out to a Philips-head driver so that you can finally install the door. This process is better done with two people, but I was so frustrated with the whole process after the first door I attempted that Dani didn’t want to be in the same room as me, so I used my shoulders, my feet, and my head to make up for the extra hands I was missing.

At least twice the hinge springs got the better of me, and once they were screwed into place I discovered that the door would not close all the way because of that fraction of an inch difference from where I intended the hing to be and where it actually slipped to when driven flush by the screws. The inside bevel of the cabinet door fit too tightly against the cabinet opening! Exasperating!
I tried re-hanging the door the first time this happened, and I was successful, but I also know that the area just hidden by the overlapping hing now has two holes really close to each other. It will be interesting to see if Swiss Cheese can hold a door in place for the long haul. I didn’t touch the second door. It is what it is, and besides, a cabinet door snap or a baby lock will hold it shut just fine. 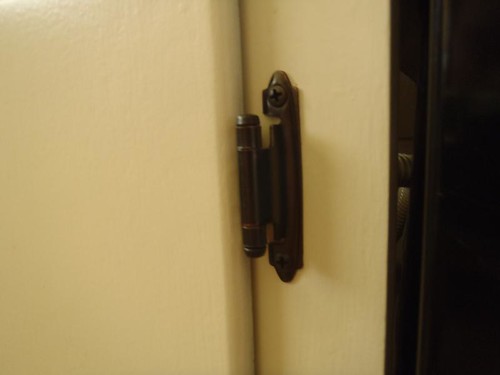 There was one more challenge I encountered just as I hung the last door. Our cabinets were hand made by someone in the past that apparently had some useful tools, but was lacking on the craftsmanship side of things. Since what we are doing to the kitchen is not so much remodeling as it is restoration, we decided to live with the cabinets that were already there. This means that we work around imperfections rather than stress over them… in theory.
The last door I hung did not fit inside the cabinet door opening I insisted it fit in. Turns out that that opening is slightly smaller than all the rest for no particular reason, and the door that used to hang there is the one door we didn’t paint because after installing the dish washer, we had one extra. 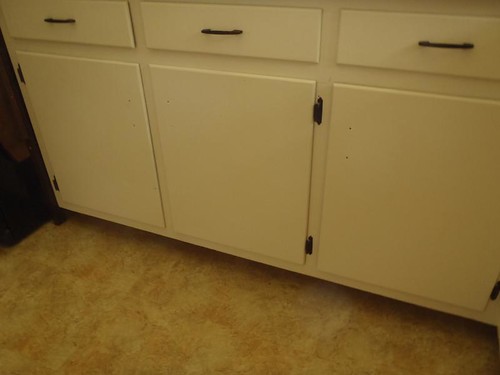 A lesson I have learned from past painting projects is the practice of marking your doors and jambs so that you put the same door in the same place after your done painting them. Dani removed the tape we were using to mark each door when she started sanding them and prepping them for paint, and then forgot to re-mark them. I know you were just trying to get the project moving my Love 😉
Anyway, in the absents of a router, I used my Dremel Multi-Max tool to score, cut, and sand the extra, inner cabinet door away. My finished product doesn’t look any worse than the previous craftsmanship, so I figure it’s a satisfactory end result! 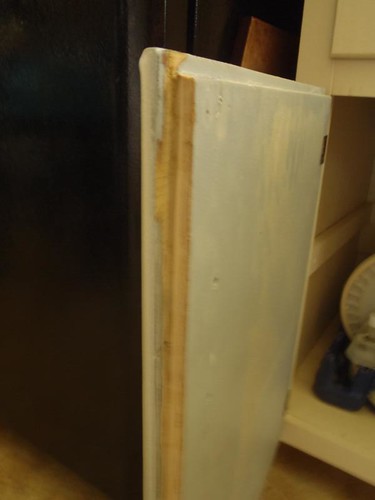 Now we just have to paint the inside of them by hand and put on the hardware. Oh….and the fake drawers. Those too.
The tools you would commonly need for such a simple project are:
By Dani Meyer on August 1st, 2012