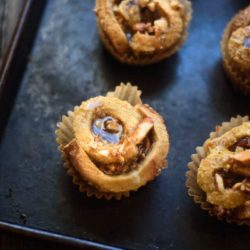 These ooey gooey french toast cinnamon roll cups are a portable mashup of french toast and cinnamon rolls. They are made from whole wheat sliced bread (no yeast or bread dough!) and come together in just 30 minutes!

Cinnamon rolls sound nice, I got to thinking this morning as I was laying in bed with my mind racing a million miles an hour. But with a softly breathing four year old curled up next to me who had roused us with nightmares six times just hours before and the desperate craving for a cup of coffee…I knew it was out of reach. We all would be hungry far before yeast had worked it’s magic on bread dough and the overwhelming sweet would need to be countered with some kind of protein or we would all be grumpy.

I rolled ideas around of ways to magically create a moist dough with no rising time and with a sudden flash of inspiration thought that this crazy idea just might work. I snuck out of bed and made quick work of putting a batch of these together french toast cinnamon roll cups in the hopelessly eternally messy kitchen. As I slipped them into the oven I looked around the kitchen and simultaneously winced and smiled.

The floor was littered with a few remaining stray tiny white wrappers, remnants of New Year’s Eve. It was beyond freezing outside last night and as we opened the box of poppers preparing to shoo everyone into the cold, a few fell on the cold tile floor in the kitchen. They met the floor and their sharp brief explosions rang out into the room.

The boys squealed and Kevin and I looked at each other, smiled and handed out packages of the poppers and began tossing them onto the kitchen floor. The children almost couldn’t believe their good fortune and proceeded to spend the next half hour devising every new kind of way they could cause the little packets to explode….throwing, stomping and running across the floor. Each explosion throwing little granules of powder into every nook and cranny of the kitchen.

These kinds of things cause a slight twitch in my head as my mind screams desperately for them not to mess up the house…again. Every hour it seems that the house has been reset to a new level of chaos even though I swear I just cleaned it up.

And yet…I know this age is passing so swiftly I can hardly stand it. Little smiles and laughs change every day in front of my eyes. And I know that at the end of it all…the wish I will have the most is that I had played more…laughed more…reveled in their little carefreeness more.

So we play. And laugh. I let them linger in our bed for hours now instead of whisking them back as quickly as I can. And when we should drink a green smoothie instead we shove sticky french toast cinnamon roll cups and too much bacon to be reasonable in our mouths on this first day of January. The real world can wait a while…it’s vacation time still after all. 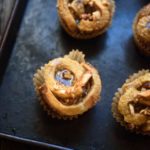 Disclosure: This post was created in our partnership with Blue Diamond Almonds. We are grateful for companies who we believe in that allow us to continue to provide high quality free content to you!