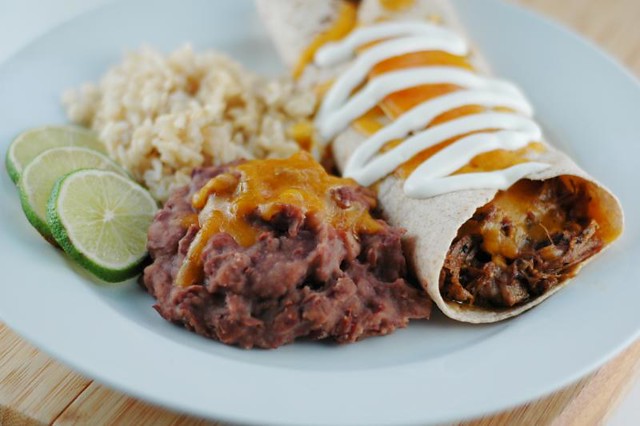 Many months ago Kevin and I slipped out of the house for our “Date Night”. i.e. stuff your face in public.

That epic night it was elected that it should be the local Mexican joint whom would be graced by our presence. Little did we know what was in store for us that night. What we found was the humbly named Burrito Verde….not very impressive on paper by any counts.

Pork served in a green sauce wrapped in a flour tortilla served with beans and rice.

What it should have said was the following,

“Pulled pork simmered for hours with tangy yet savory tomatillo sauce that gushes in your mouth like a stew wrapped in a tortilla covered in cheese. Slurping goodness.”

We returned the following week for taste comparisons, again. And then set to work.

One pork roast. One crockpot. All day they must dance together. 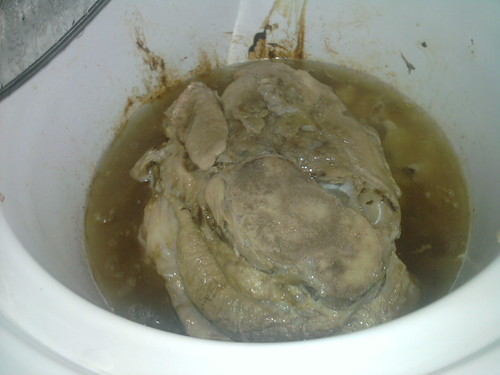 First order is to pull out your bag of beautiful sticky husked tomatillos.

(Any self respecting hispanic store will carry these) 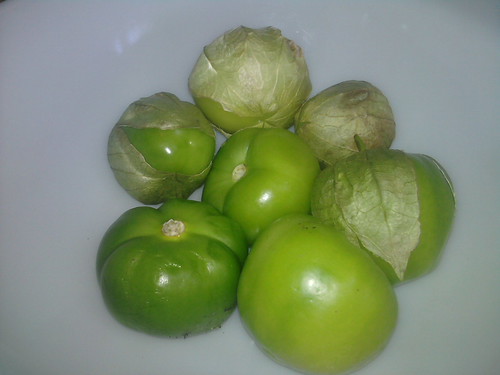 Pull off the husks and wash them under warm water to get rid of all the sticky. 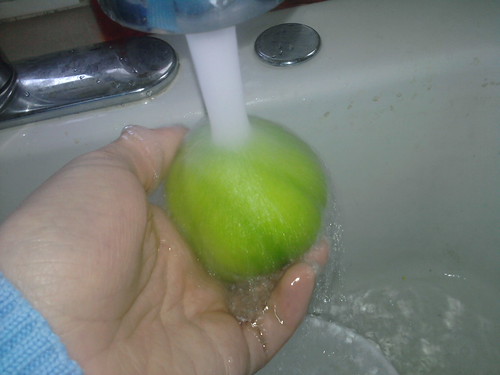 Chop ’em all in half 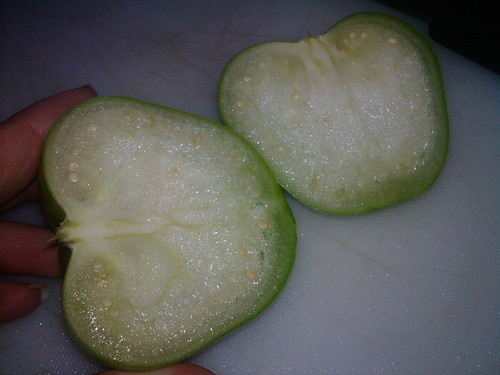 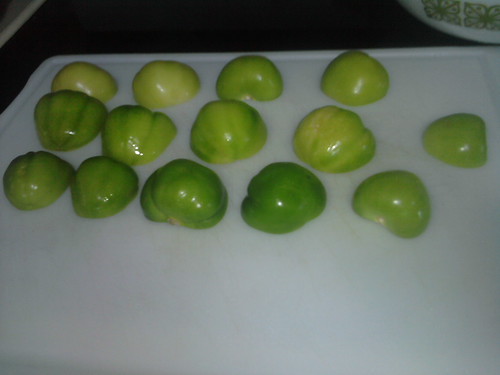 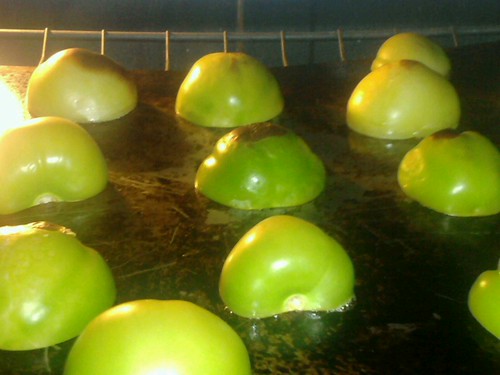 We are going to add serious amounts of onion, lime, cilantro and as many jalepenos as you can stand. Don’t be afraid to be generous with the jalepenos….it can take it.

At this point in the game I thought it was great fun to chop up all the jalepenos with my bare hands….ahh  ha ha. All was good until after I sat down after finishing the recipe and scratched my nose.

Only after three hours, ice cubes, rubbing alcohol, a gallon of tears and finally dipping my face in milk did the pain end.

p.s. the next time we made this I did yet again the same mistake. But Kevin handed me a stalk of aloe vera, patted me on the head and I was fixed in ten minutes flat. Gotta love husbands. 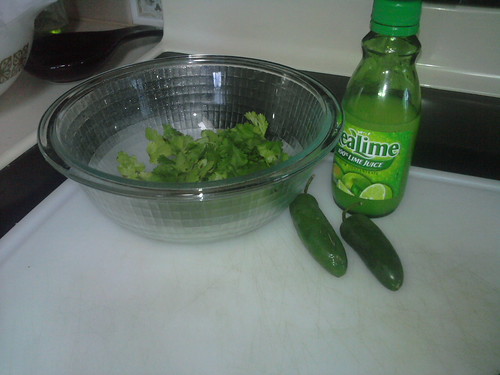 Back to work, deseed the jalepenos and take out most of the membranes (leave them if you like your face to burn off) 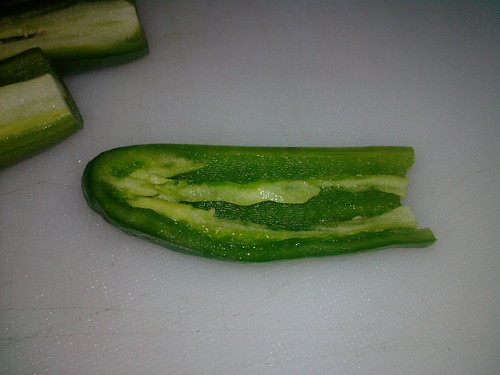 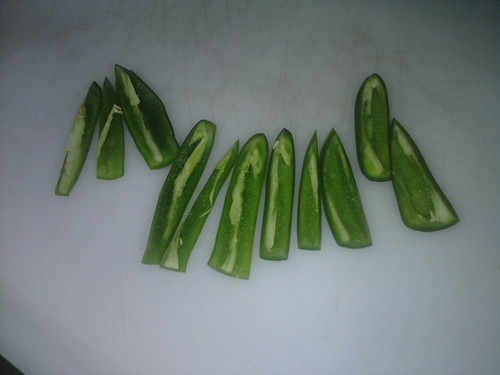 Chop up an onion. Don’t worry about it being too fine its going in the blender. 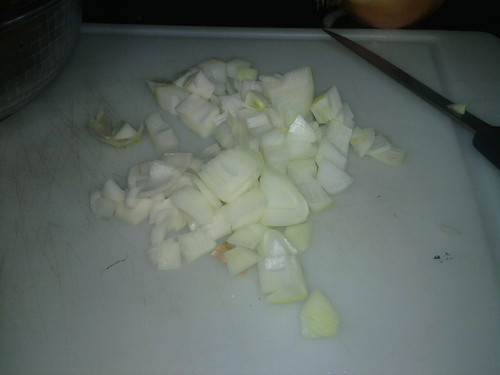 We have since determined that adding a few big poblano peppers really rounds out the flavor of this sauce. Half and deseed them as well.

Then roast the onions, peppers and tomatillos. Pull them out when the tomatillos are good and black and bubbly. 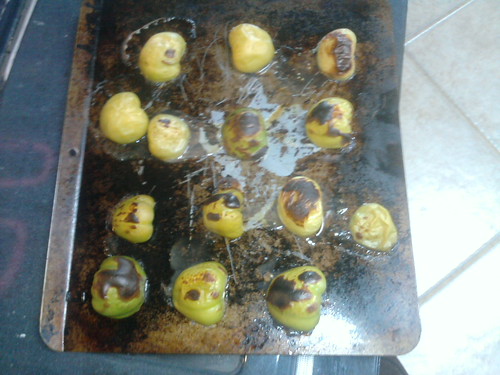 Then throw everything in the blender. Jalepenos, onions, cilantro, lime, tomatillos. 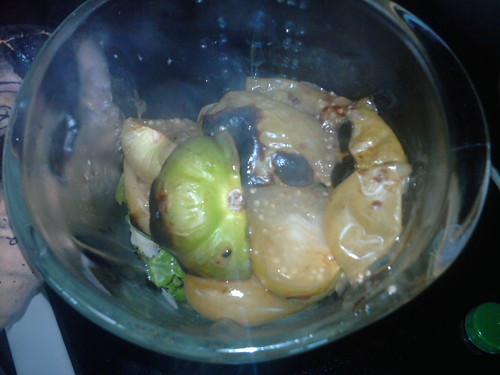 Add some salt and pepper and a generous helping of garlic powder or minced garlic.

We also like to dust in some cayenne to taste. 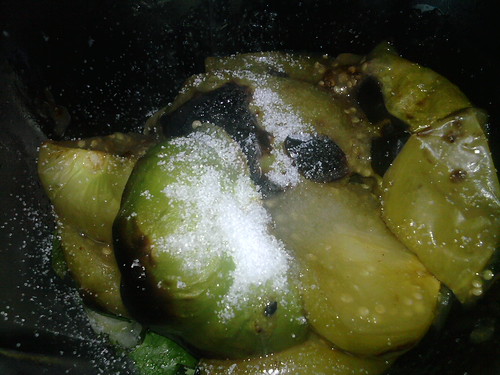 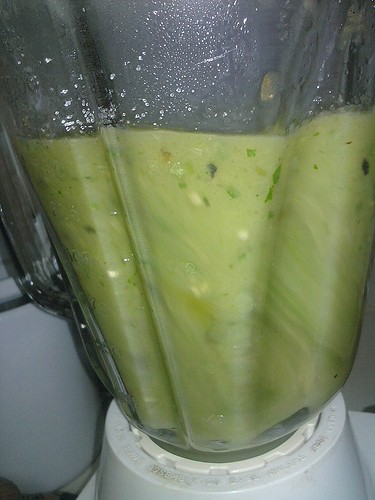 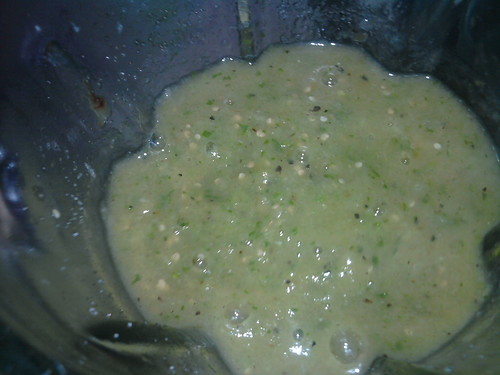 Pour over the pork and stir.

You should ideally let this cook in the sauce all day. But if you’re like me and you didn’t remember the tomatillos until you are driving home from work you can shred the meat, let it simmer in the sauce for an hour or so and call it good. 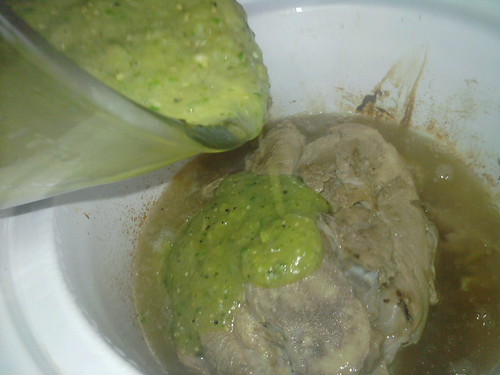 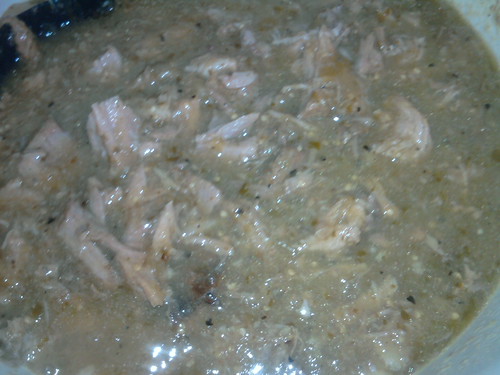 Wrap in a warm flour tortilla, top with cheese and broil it for a second. Depending on how cooked down your sauce is serving these as wet burritos swimming in sauce is a particularly delicious choice. 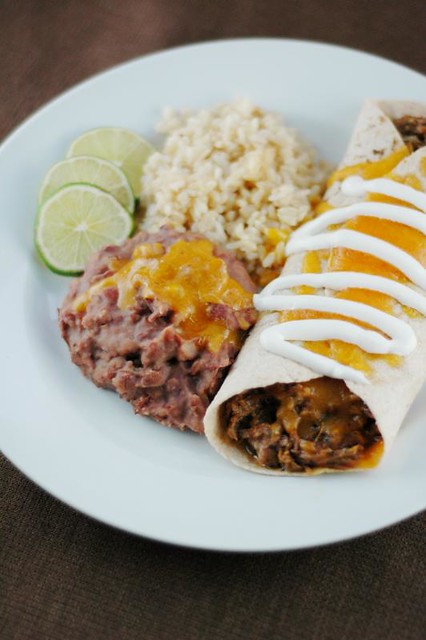 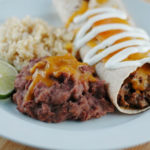 This also makes a phenomenal stew or can be served over rice.

This post was shared on The Homestead Barn Hop.